Hey, let’s get ready for some viral vibes!

Infento went viral on the internet. We went what? Viral! We call something viral when it is quickly and widely spread by for instance Facebook, Twitter or YouTube. This is the mysterious and marvellous effect the internet can have.

As of yet our video was viewed more than 14,000,000 (!) times. Yes that’s fourteen million. In this newsletter you can read all about it. We even beat Coca-Cola and Aldi with their product videos.

This is the menu of today:

Grab a comfy seat and read all about our viral adventures.

How Infento became an internet hit

The word viral comes from ‘virus’, which has it’s origin, as you could have guessed, in Latin. The meaning of the word is ‘poison/venom’ or a slimy liquid (how tasty!).

In the wintertime, viral is a word you probably don’t want to hear. People spreading viruses from one person to another can lead to a flu epidemic in no time. 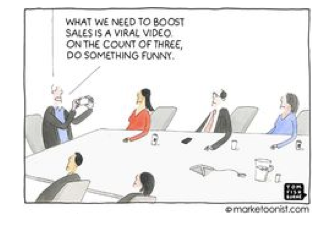 But if you’re a company or someone who wants everyone in the world to see your latest YouTube video, then viral is a word you love. Today, “going viral” refers to the sharing of something — often a video or a website link — via email or social media outlets, such as Facebook and Twitter.

Viral videos started circulating by email long before video sites, such as YouTube, became popular. The term “viral video” didn’t come around until 2009, when it was first used to describe the video “David after Dentist” where you can see an anaesthetized boy talking to his dad.

Luckily we’re all healthy over here at Infento, but it seems Facebook has caught the Infento virus big time :).

So how exactly did we go viral on the internet?!

Our product video was first shared at the start of last year on the Facebook page of GI Gadgets, a gadget blog with over 5 million Facebook followers. They posted about us again as the best Christmas gift idea at the beginning of December and that post eventually snowballed into a viral hit.

The video post at Gi Gadgets raked in an unbelievable 4.2 million views but things really got crazy when social media website Game On saw that video and decided to post it as well. They did so on December 16th and at first nothing special happened. But suddenly after a couple of days the big snow ball started rolling… rapidly.

The Infento virus went airborne! The video post got millions and millions of views and has been shared over 220,000 times and counting. At this moment more than 10,000,000 people have watched the Game On video. So in total only these two videos have been watched 14 million times. That deserves the ‘viral’ stamp, no doubt about it. 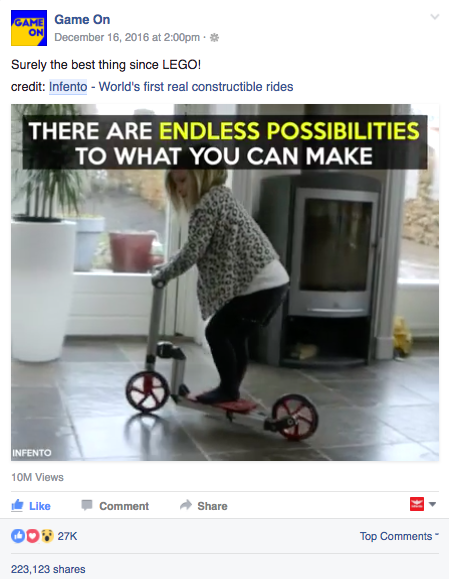 In the comments section (8.5k!) we received some great feedback:

Eddie Cubero This is tremendously awesome. Just when our youth is being taught to buy and replace things when they break, this is a great way to teach our youth to create, build, repair, and repeat.

David Paterson I want this for myself! Somebody please tell Santa that I’ve been a good boy.

Dennis Skeeters Where were these when I was a kid, love it. At last a great adaptive teaching toy, very cool.

Devon Green Finally something for kids that actually makes them think in a practical, hands on way!

Joseph Wilds Awesome! Stimulate the imagination and get kids to work with hands, other than pushing buttons on an Xbox.

Tom Fleming Very clever engineering… not to mention the interaction of child and parent, the best part of the gift!

Casey Royer This has got to be the coolest thing ever

Tim Watson The world needs more of this

Jesseca Annie Kids are lucky these days… Lol. These are AWESOME!

Maxine Snibson A “must have”

Phyllis Langin My boys would have been in seventh heaven

Matthew Vaughn This is better than Lego

The proof is in the likes

The effect of the viral video is not hard to spot. This graph shows the new Facebook likes for our Infento page. December brought us a great gift: 13,000 extra likes that brings our total to 47,442 likes.

What a miracle invention this internet thing. This social sharing. Suddenly out of nowhere if you have a product that people really love you are known by more than 14 million people in a matter of weeks. Very very powerful stuff.

That’s more than all the inhabitants of certain countries like Belgium, Sweden, Jordan, Bolivia and Portugal… Just incredible.

Since we are talking about viral videos in this newsletter, let’s take you on a ride through viral lane, with this top 5 of product videos. All 5 reached millions of people, and if you watch them (why not, it’s Sunday), you will know why.

Ok, to finish this off we show you two charts to put things in perspective. A viral hit is nice but doesn’t every video receive millions of views?Apparently not. As you can see below only 0.33% of YouTube videos get 1 million views or more, so you can imagine we’re extremely honoured to have passed the 14,000,000 mark.

And just to have some fun… Let’s take a look at the chart of the most shared Christmas ads in December 2016.  Our video with 220k+ likes is beating Coca-Cola Brasil (Ok, it is Coca Cola Brasil, but still this is a country with 206 million people. Only 4 countries in the world have more inhabitants. You know which ones?) and Aldi (a huge German retail chain). Too bad the maker of this chart didn’t know Infento yet otherwise we would have made it on this list: 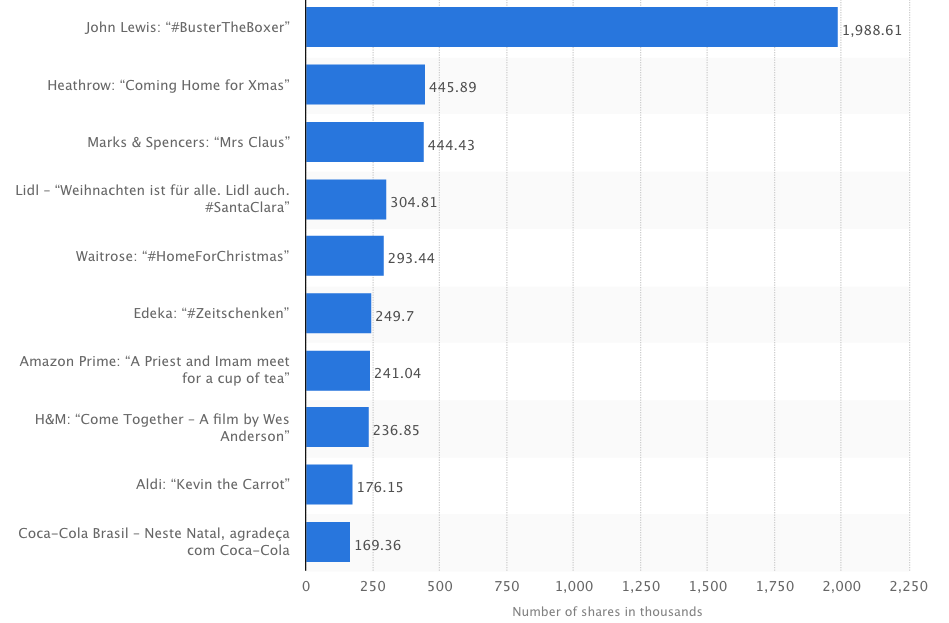 So there you have it. That was the viral news that we wanted to share with you, our valuable follower. It’s been a real thrill to experience something like this. And it gives us tremendous energy to move Infento forward into the future. Apparently our product resonates with a very big worldwide audience.

Our online store is a huge instant success because of the viral video hit. We truly couldn’t have hoped for more when we started this company!

Thanks so much for reading!

Talk soon and, as always, keep on riding,

PS. Which countries are larger than Brasil in terms of people? The first three are easy. China, India and the US. The fourth? Indonesia. Did you know that one? Kudos to you smarty-pants :-).