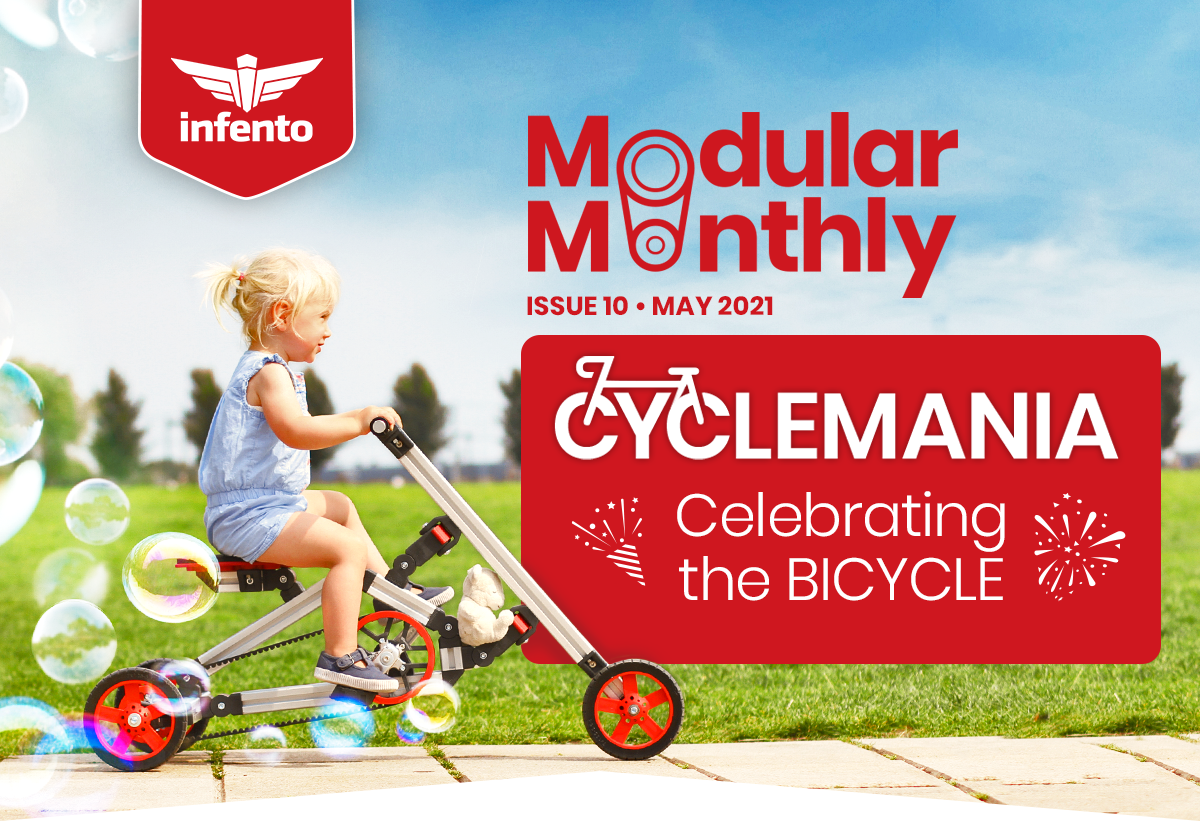 Celebrate cycling with us

June 3rd is World Bicycle Day. The United Nations have declared this day to celebrate the bike. We decided to join the celebration. And we won’t forget to put the biggest cycling event in the world in the spotlights: the Tour de France.

Enjoy this edition of the Modular Monthly!

The history of the bike

Let’s start with the history to get to know more about the bicycle and its importance. The first two wheeled, steerable machine was introduced in 1817 by a German named Karl von Drais. This clunky and heavy wooden thing did not yet have pedals or brakes. You moved it by pushing your legs off the ground. Like a toddler does on an Infento Balancer!

The invention was a success and different inventors took inspiration from it. A Frenchman added cranks and pedals to the front wheel in 1863. The wooden wheels were metal-rimmed. Riding this bike on the cobbled streets caused a shaky experience for the rider. That’s why this bike was also known as the ‘boneshaker’.

The 1870’s brought the high-wheel bicycle that looks quite special. It had a huge front wheel to cover bigger distances and a small back wheel. In these days, this bike was seen as a dangerous toy for sporty young men.

From the 1890’s this changed. The ‘safety bicycle’ looked more like the bicycle as we know it today. It had a chain and gear, so the large front wheel was history. Pneumatic tires replaced the iron rims. The majority of people could not afford a horse and carriage, but could afford a bike. This meant they were able to cover longer distances for the first time in their lives. Bicycles were no longer a boys toy, they meant a huge deal for the freedom and emancipation of women.

Cycling as a sport

The US knew an extreme kind of bike races in the 1890’s: the six day race. Riders would cycle non-stop during six days! Prize money could go as high as 10.000$, a huge sum of money in that era.

In Europe, the first Paris – Roubaix race was organized in 1896. The race is also called ‘hell of the north’, due to the cobbled and muddy roads. During the first edition of this event, only 4 riders finished within an hour of the winner.

In 1903, the first edition of the Tour de France was held. The riders would continue riding at night and get a rest day in between the 6 stages (of 400 km per stage!). 60 riders started the competition, but only 24 remained at stage 5. That’s what we call a knockout race. Literally, since it occurred that fans beat up rival riders! In the third year of the Tour, the night riding was cancelled. It turned out riding in the dark offered a great chance to cheat…

Tour organizer Henri Desgrange was known for his ambition to push the riders to the limit. Until 1930 it was not allowed to switch bikes during the race. Repairs were allowed, but only by the rider himself! In 1937 the use of a derailleur was allowed. Yes, you read that well. Before 1937 they used single speed cycles. For a race that also included hills and mountains.

Imagine this: you’re riding a single speed bicycle, in a woolen outfit. In warm July. Carrying your own spare parts and tires. You have to climb the highest mountains of the Pyrenees. Snow on the tops was not unusual. And then descend, without brakes.

What, without BRAKES?! Indeed, the bicycles were not equipped with brakes. You could slow down by pushing the pedals backwards. But that requires a lot of force. And don’t have the illusion the roads were as smoothly paved as they are today.

The 108th edition of the Tour de France starts June 26th. Compared to the old days, riders are pampered now. They have a team of mechanics, massage therapists, exchange bikes, chefs, etcetera. But still, they have to cover 3383 kilometers by pedaling with their own leg power 😉

“Ride as much or as little, as long or as short as you feel. But ride.” – Eddy Merckx

Riding a bike means a whole new world opens up to you. It gives you a true sense of freedom, it’s great for your health and for the environment. Get out there and ride. Inspire your kids to have the same sensation and build the Infento Booster together!

This cool model is part of the Infento Genius Kit for kids aged 0 to 14. The Booster is a perfect first Ride for your child to enter the world of pedaling. Start them young!

GET YOUR KIT NOW

Makers of the Month

Matilda and Theodora are the Makers of the Month! Dad David from Austria tells us about the invention:

“Glad to introduce our Minibike with sidecar creation. The sidecar was made from the remaining parts of the Legend Kit. My daughters Matilda and Theodora always have a lot of fun building a new custom ride! And of course, daddy as well 😉 We really like your products and the possibility to create individual creations. Keep on doing your fantastic work!”